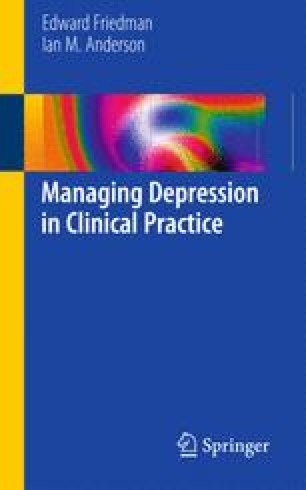 The essence of the theoretical background of antidepressant action is based on the monoamine hypothesis of depression. In the 1960s, it was noted that reserpine, a catecholamine-depleting agent, induced depression and that this effect was reversed by antidepressants. The involvement of monoamines was also supported by the observations suggesting that dopamine (DA) and norepinephrine (noradrenaline; NE) were functionally deficient in depression and elevated in mania. Similarly, Ashcroft proposed that an indoleamine, now called serotonin (5-hydroxytryptamine; 5HT) was deficient in depression, leading eventually to the development of SSRIs. It is widely believed that the chronic administration of SSRIs resulting in 5HT reuptake blockade is responsible for the downregulation of 5HT1A-receptors present on the cell bodies of serotoninergic neurons. This effect reduces negative feedback, increasing 5HT neuronal firing and hence 5HT synaptic availability. This is a proposed mechanism to explain the delay between acute administration of an antidepressant and the therapeutic effect. It is unlikely to be the full explanation and does not generalize to drugs acting in different ways on the monoamine systems. It is also increasingly recognized that the onset of improvement with antidepressants is immediate, although significant clinical benefit takes some weeks to be evident. Current theories of the mechanism of action of antidepressants emphasize effects beyond the synapse such as neurotropic effects [1].

Reuptake Inhibitor Augmentation Strategy Serotoninergic Neuron Discontinuation Syndrome Discontinuation Symptom
These keywords were added by machine and not by the authors. This process is experimental and the keywords may be updated as the learning algorithm improves.
This is a preview of subscription content, log in to check access.