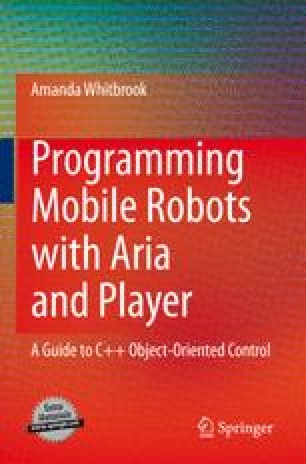 Another way of controlling a robot with ARIA is to create action subclasses that inherit from the base ArAction class. When instances of these classes are added to an ArRobot object the robot’s resulting behaviour is determined through an action resolver. This invokes each ArAction object (via its fire() method), and the actions request what kind of motion they want by returning a pointer to an ArActionDesired object. The action resolver determines what the resulting combination of those requested motions should be, then commands the robot accordingly. The idea behind this is to have several behaviours acting simultaneously, which combine to drive the robot.

Base Class Speed Limiter Action Request Direct Command Chapter Deal
These keywords were added by machine and not by the authors. This process is experimental and the keywords may be updated as the learning algorithm improves.
This is a preview of subscription content, log in to check access.