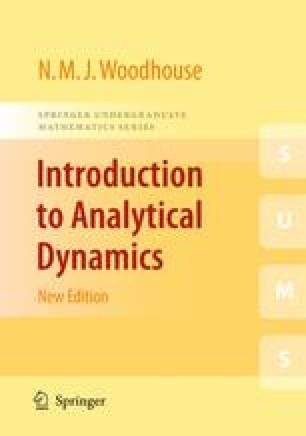 One Degree of Freedom

A system with one degree of freedom is one in which just one coordinate is needed to determine the configuration. The motion is specified by expressing the coordinate as a function of time. Typically this involves solving a second-order differential equation, called the equation of motion.

An obvious example is a particle of mass m moving along the x-axis under the influence of a force F, where the equation of motion is
$$m\ddot{x} = F.$$
The force could depend on the position of the particle, as in the case of tension in a spring, or its velocity, as in the case of air resistance, or on time, or on all three. In the latter case, we are confronted with the problem of solving an ordinary differential equation of the form
$$m\ddot{x} = F(x,\dot{x},t).$$
(2.1)
Other examples are a pendulum swinging in a vertical plane, where the coordinate is the angle with the vertical, or a system of interlocking cog-wheels in a machine, such as old-fashioned watch, where there are a large number of moving parts, but the rotation of one part determines the configuration of the whole system, so there is only a single degree of freedom.

Analytical Dynamics Phase Plane Critical Function Chain Rule Dynamical Trajectory
These keywords were added by machine and not by the authors. This process is experimental and the keywords may be updated as the learning algorithm improves.
This is a preview of subscription content, log in to check access.