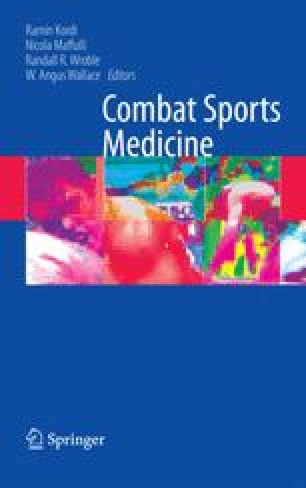 The sport of mixed martial arts (MMA) is a relatively new phenomenon in most countries. Although MMA can be traced back to the Vale Tudo matches occurring in Brazil since the 1920s and 1930s, some have argued that the true origins are more likely the ancient Greek games and the sport of pancrase. In any event, MMA has a long history and its popularity has grown exponentially in the USA and other western countries in the past 10–15 years. Though cloaked in controversy, it appears MMA is here to stay. Those involved in combat sports need to understand the history and rules of MMA in order to understand the sport and help prevent injury.

Although pancrase – a sport in the ancient Greek games that combined wrestling and boxing – appears similar to MMA, the recent...

Cervical Spine Weight Class Combat Sport Technical Knockout Decisive Victory
These keywords were added by machine and not by the authors. This process is experimental and the keywords may be updated as the learning algorithm improves.
This is a preview of subscription content, log in to check access.