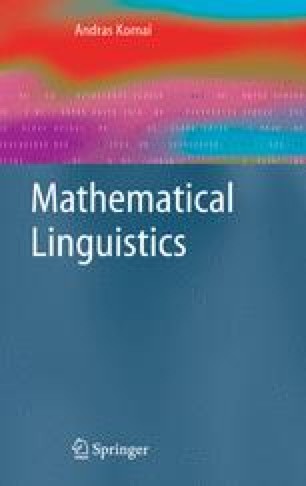 What is mathematical linguistics? A classic book on the subject, (Jakobson 1961), contains papers on a variety of subjects, including a categorial grammar (Lambek 1961), formal syntax (Chomsky 1961, Hiż 1961), logical semantics (Quine 1961, Curry 1961), phonetics and phonology (Peterson and Harary 1961, Halle 1961), Markov models (Mandelbrot 1961b), handwriting (Chao 1961, Eden 1961), parsing (Oettinger 1961, Yngve 1961), glottochronology (Gleason 1961), and the philosophy of language (Putnam 1961), as well as a number of papers that are harder to fit into our current system of scientific subfields, perhaps because there is a void now where once there was cybernetics and systems theory (see Heims 1991).

Natural Language Mesoscopic System Formal Rigor Categorial Grammar Minority View
These keywords were added by machine and not by the authors. This process is experimental and the keywords may be updated as the learning algorithm improves.
This is a preview of subscription content, log in to check access.