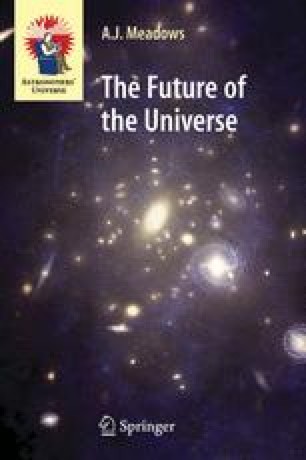 The Sun is one of about 100 billion stars that make up our Galaxy (written with a capital G to distinguish it from all the other galaxies in the universe). Seen from above, it looks a bit like a sombrero hat, with a brim consisting of a flattened disk of stars. These are revolving round a central crown, which is also made up of stars, though more densely packed than in the disk. Since the Galaxy looks the same from the other side too, its overall shape is more like two sombrero hats pressed together. A closer look reveals that the central bulge is not entirely symmetrical. It is actually slightly elongated—a little like the ball used in American football or British rugby, rather than a soccer ball. The bulge is some 20,000 light-years across, compared with the disk’s 100,000 light-year diameter. (The exact size of the disk is difficult to measure because the stars tend to peter out toward its edge.) Orbiting the bulge are large groups of stars—spherical clusters—mostly formed from leftover bulge material in the early days of our Galaxy.

Black Hole Solar System Massive Star Galactic Center Interstellar Cloud
These keywords were added by machine and not by the authors. This process is experimental and the keywords may be updated as the learning algorithm improves.
This is a preview of subscription content, log in to check access.