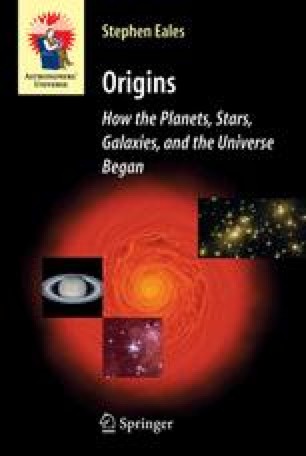 It is difficult to see the change in a planet during a human lifetime, but it is not impossible. Anyone who lives near a volcano has seen a planet’s surface being reshaped. Anyone who lives near a river is a bystander, even if they don’t realize it, to the slow-motion destruction of a mountain. Boil the water taken from any river and you will find left at the bottom of the pan a tiny residue of dirt, dirt that has been washed off the hills and mountains by rain. Over millions of years, this slow erosion can reduce the height of a mountain by thousands of meters (the Grampian Mountains in Scotland were once the size of the Himalayas). The story of a planet is a slower-paced story than our own human stories, but it is possible, if one looks carefully, to see it happening in front of our eyes. It is much harder though to see the change in the stars. The night sky looks the same from generation to generation and it really does seem to be the eternal backdrop to our individual stories. The stars we see today are the same as the stars that the Romans and Greeks saw, and are even virtually the same stars our ancestors saw in Africa one million years ago.

Neutron Star White Dwarf Sixteenth Century Main Sequence Hubble Space Telescope
These keywords were added by machine and not by the authors. This process is experimental and the keywords may be updated as the learning algorithm improves.

The positions of the stars are gradually changing. Our ancestors one million years ago saw the same stars, but they did not see the same constellations we see today.