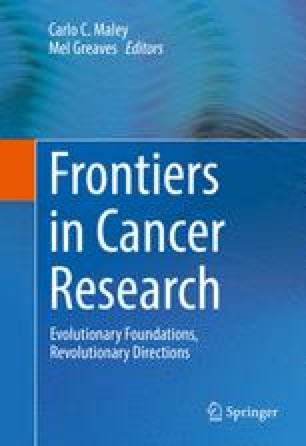 The Darwinian Dynamics of Motility and Metastasis

Cancer is a deadly disease, but it is rarely the primary tumor that kills patients. Most cancer deaths are due to metastasis, a complex and still poorly understood process. Metastatic cells may be particularly deadly not just because they can colonize new sites, but because they exhibit a much more plastic and adaptable phenotype compared to primary tumor cells. In this chapter we provide an overview of the evolution of metastasis. First, we review what is known about the mechanisms underlying cell motility/metastasis. Then we describe how evolution operates on cell motility, how evolution operates within tumors, how selection among micrometastases may be important and the role of co-evolution between tumor and stromal cells during metastasis. In addition to reviewing the literature, we describe a number of important insights from evolution that can help guide future work on the nature and dynamics of metastases. These include the application of ecological dispersal theory to the evolution of cell motility, the fact that somatic selection can favor plasticity in neoplastic cells, the possibility that selection among micrometastases may lead to the evolution of collective phenotypes that can extract resources from the host body, and the observation that the parameters of evolution may differ dramatically between primary tumors and metastases. By targeting the processes of evolution of cell motility, cell plasticity and the ability of cells to alter their environments, it may be possible for clinicians to substantially extend life and improve the quality of life for cancer patients. Evolutionary and ecological tools and approaches can help provide a basic framework for integrating what is already known about the evolution of metastasis and guiding future work on this topic.

We thank all the members of the Evolution of Metastasis working group at the Evolutionary Medicine Summer School at Mount Desert Island Biological Laboratories in Bar Harbor, Maine in August of 2012 for many insightful discussions.

TGF-β is a major regulatory molecule in cell migration and invasion. TGF-β binds to and activates its receptors TβRI and TβRII [104, 105, 106, 107]. Receptor activation leads to Smad complex translocation from cytoplasm to nucleus and activates the expression of transcription factors such as ZEB1, ZEB2, SNAI1, SNAI2, TWIST, which promote cell migration and invasion [104, 105, 106, 107]. TGF-β can also turn on non-Smad cell signaling such as GTPase RhoA and phosphoinositide-3-kinase (PI3K) pathways through TβRI and TβRII, which then activate cell migration [108, 109].

The effects of these cell surface receptors and signaling molecule activation are detachment and motility of tumor cells. The activation of transcription factors such as SNAI1, SNAI2, TWIST, ZEB1 and ZEB2 suppresses the expression of E-cadherin, a major component of epithelial adherens junctions [134]. Loss of E-cadherin function is one of the characteristics of epithelial-mesenchymal transition (EMT), which promotes tumor cell detachment, migration and invasion from primary tumor to neighboring tissues [135, 136, 137]. In concert with cell detachment, the activation of PI3K and PLC pathways promotes actin polymerization and cell movement [138, 139, 140].

Cell detachment and movement can also be regulated epigenetically. MicroRNAs are 21–23 nucleotide long small noncoding RNAs and can serve as mediators between cell surface receptors and their downstream transcription factors. MiR-200 family members are regulated by TGFβ pathways and suppress ZEB1 and ZEB2 [141, 142, 143, 144, 145]. The coordination of the activation of pathways that promote cell detachment and movement and the suppression of pathways that inhibit cell movement causes tumor cells to migrate and invade.

Cell migration includes single cell migration and collective cell migration. Both forms of migration contribute to the seeding of tumor cells in secondary organs and eventual growth of metastases [146]. The signaling pathways critical for single cell migration regulate reorganization of actin cytoskeleton and membrane protrusion formation such as invadopodia, lamillipodia and filopodia [19, 147, 148, 149, 150, 151]. Rho GTPases play important roles in these processes [152, 153, 154, 155, 156] (Table 8.1). GTPases are activated in GTP-binding state and inactive in GDP-binding state. RhoA is one of the GTPases that activate cell migration. It activates downstream ROCK kinases that promote actin stress fiber formation [152, 153, 154, 155, 156, 157]. Other GTPases promote cell migration through different mechanisms. Rac1 regulates lamillipodia by activating PAK kinases whereas Cdc42 promotes filopodia formation by activating PAK kinases [158, 159]. The activation of GTPases is controlled by GTPase-activating proteins (GAPs), guanine nucleotide exchange factors (GEFs) and guanosine nucleotide dissociation inhibitors (GDIs). Activation and inactivation of RhoA requires RhoGAP p190-RhoGAP and RhoGEF Vav2 [160, 161, 162, 163, 164]. Rac1 function of promoting cell movement is regulated by RhoGEF Dock3 [21]. p120-catenin serves as a GDI for both RhoA and Rac to suppress their activities [165, 166, 167]. The activation or suppression of GTPase and their regulators are regulated by cell signaling pathways. For example, PDK1 functions as a mediator between PI3K signaling and RhoA activity [168]. The activation of these signaling molecules allows tumor cells to migrate through collagen fibers in the tumor microenvironment.

In contrast of single cell migration, cells in collective migration move in sheets and strands while maintaining cell-cell junctions. Such movement requires the coordination of cell adhesion and cell migration. It has been shown that cell surface protein podoplanin is able to mediate such movement [169] (Table 8.1). Podoplanin is expressed in cancer cells of multiple types such as breast, lung, ovary, squamous cell carcinoma, etc. that locate on the outer layer of invasion front [170, 171, 172]. Podoplanin expression is sufficient for cells to form filapodia-like protrusion and display collective migration [173]. When a podoplanin transgenic mouse model is crossed with RipTag pancreatic cancer mouse model, pancreatic cancer cells in this model exhibit collective cell invasion without epithelial-mesenchymal transition, demonstrating the podoplanin has distinct mechanisms than those of single cell migration [169]. In addition, stroma cells are required for collective-invasion cells to go through extracellular matrix [174]. An in vitro cell culture model demonstrated that fibroblasts exhibit protease activities and remodel matrix for the collective-invasion cells to move through extracellular matrix [174]. This is in contrast with capabilities of single migration cancer cells that exhibit protease activity themselves [175].