Please God Send Me a Wreck 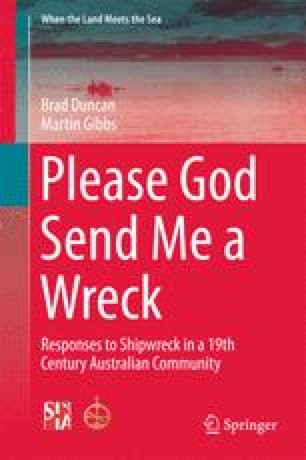 Chapter
Part of the When the Land Meets the Sea book series (ACUA, volume 3)

This chapter explores the Queenscliffe community’s responses during the pre-impact phase when a shipping disaster seemed imminent, as well as the impact phase when the wreck or stranding was happening. This was a critical period where those aboard and ashore had to make decisions and undertake actions which could significantly influence the course of events and their consequences, including the resultant archaeological record. In particular, the role and procedures of the lifeboat service are considered. Following this is an examination of the recoil and rescue phases where the immediate threat to life had receded and the community and survivors dealt with the aftermath of the disaster. One of the important elements within this chapter is the balance between formal (government) and informal (community) roles and responses from those based on land, as well as tensions between their altruistic versus opportunistic motivations. Sensitive treatment of survivors and the dead is contrasted to economically driven salvage processes, looting and exploitation of disaster as a tourism opportunity.

Men were involved on both sides of the wreck. They would save people from the wreck and then be involved in the salvage and/or looting of the same wreck. This included lifeboat people, fishermen, and even Pilots . Once the crew and captain were off the wreck there were no witnesses when the looters returned to the wreck in the dark.