A Student's Guide Through the Great Physics Texts 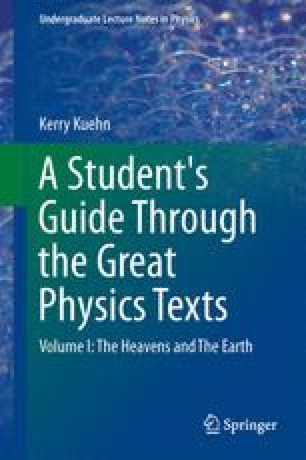 A Finite Universe with No Boundary

In Parts I and II of his book, Relativity, Einstein explained his special and his general principles of relativity. In so doing, he derived a novel theory of gravity which was able to explain the slow precession of Mercury’s elliptical orbit around the sun and also why light falls in a gravitational field. Newton’s theory of gravity was powerless to explain these experimental observations. Now, in Part III, Einstein applies his theory of gravity to the problem of the overall size and structure of the universe. He begins by laying before the reader a fundamental difficulty which is encountered if one takes seriously Newton’s theory of gravitation. How does he address this problem? To what conclusion is he led? And do you find his conclusions sensible?

Gravitational Field Spherical Surface Spherical Space Fundamental Difficulty Material Universe
These keywords were added by machine and not by the authors. This process is experimental and the keywords may be updated as the learning algorithm improves.

The geometrical properties of space are not independent, but they are determined by matter.

Cite this chapter as:
Kuehn K. (2015) A Finite Universe with No Boundary. In: A Student's Guide Through the Great Physics Texts. Undergraduate Lecture Notes in Physics. Springer, New York, NY