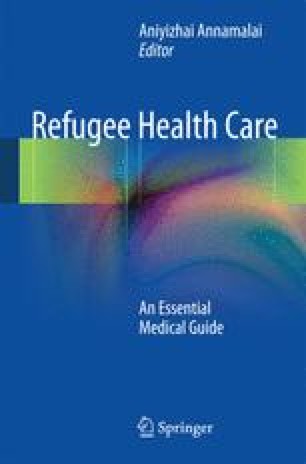 Refugees are resilient survivors who have been displaced from war-torn countries where there was limited access to quality medical care and preventive health. Moreover, possessing low socioeconomic status, malnutrition, infectious diseases, and poor social support may have a deleterious impact on their health. Thus, caring for refugees provides an opportunity to provide culturally-sensitive care while addressing the unique cultural, linguistic, and literacy challenges which may impact their psychosocial adjustment, mental as well as physical health and well-being in their host country of resettlement. For refugee women, cultural and/or religious beliefs around sexual behavior, prenatal care, breastfeeding, cancer screening, contraception, intimate partner violence, and such traditional practices as Female Genital Cutting, may influence decisions that they make regarding their health care. Furthermore, health care providers should be prepared to address mental health concerns such as depression, anxiety, and posttraumatic stress disorder (PTSD), which often occurs within the context of immigration, acculturation, and rapid changes in family and social structures. Refugee women are a vulnerable population for whom culturally-informed care can promote health and wellness, as well as a trusting patient-provider relationship.

Appendix: Suggested Assessment Questions and Strategies for Routine Screening of Violence Against Women

The following sample assessment questions can also be used to develop a strategy most comfortable for each individual:

It is important to adapt your assessment questions and approach in order to be culturally relevant to individual patients. Listen to patients, pay attention to words that are used in different cultural settings and integrate those into assessment questions. Focusing on actions and behaviors as opposed to culturally specific terminology can also help, or some groups may be more willing to discuss abuse if you use general questions. Be aware of verbal and nonverbal cultural cues (eye contact or not, patterns of silence, spacing, and active listening during the interview).