The Population of Modern China 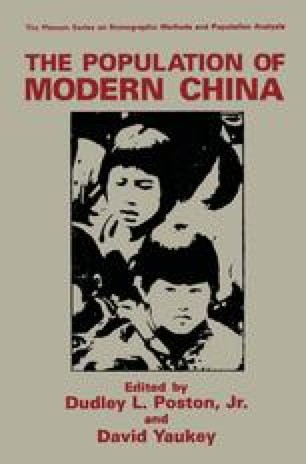 A Brief History of China’s Population

The Chinese empire took a population count in 2 A.D. and others at irregular intervals thereafter. Table 1, which traces China’s population over the last two millennia, is based on these census and registration counts, adjusted when necessary [1]. A striking feature of China’s demographic history is that the population apparently fluctuated between 37 and 60 million for a thousand years, showing no consistent trend. The first recorded instance of sustained population growth (averaging an estimated 1.2 percent a year) took place in the last half of the eleventh century under the Song (Sung) Dynasty, but this trend was reversed by subsequent centuries of dynastic struggle, civil war, Mongol invasion, and bubonic plague. Then, starting from the early years of the Ming Dynasty in the late fourteenth century, China experienced six centuries of population growth. Only twice was this growth checked, once because of the fall of the Ming Dynasty in the early seventeenth century, and once during the Taiping Rebellion that hastened the decline of the Qing (Ch’ing) Dynasty in the late nineteenth century. In neither instance are population statistics adequate to document the temporary reversal. The period of most rapid population growth (1749–1851) saw more than a doubling of China’s population in a century.

Total Fertility Rate Qing Dynasty Song Dynasty Ming Dynasty Marital Fertility
These keywords were added by machine and not by the authors. This process is experimental and the keywords may be updated as the learning algorithm improves.
This is a preview of subscription content, log in to check access.