Introduction to Python for Engineers and Scientists 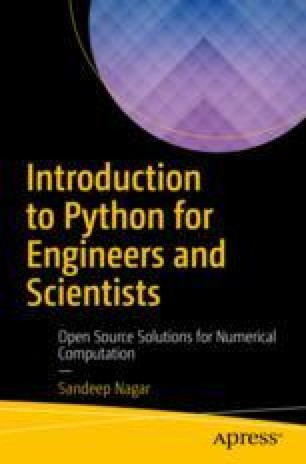 Python emerged as a leader among well-established and optimized languages including C, C++, and Java for very simple reasons. Python incorporates the principles of the philosophy that complex tasks can be done in simple ways. We tend to think that real-world, complex problems need complex pathways to produce complex solutions. The developers of Python embraced the exact opposite philosophy. Python was created to have an extremely fast and simple learning curve and development process for software engineers. As a result, it is considered the most general-purpose programming language since users can work in almost any study domain and still be able to find a useful piece of code for themselves. Python harnessed the power of the open source movement, which helped it amass a huge user base from virtually all walks of life. Being open source in nature, Python allowed people to make small programs and share them with each other with ease. In Python, a group of programs for performing various tasks makes up a module (package). At the time of writing, there are over 117,181 modules that have been submitted by an even larger number of developers around the world. The large number of modules and developers has allowed Python’s use to jump rapidly within the computer science community and finally grab the number-one position as the most favored programming language.