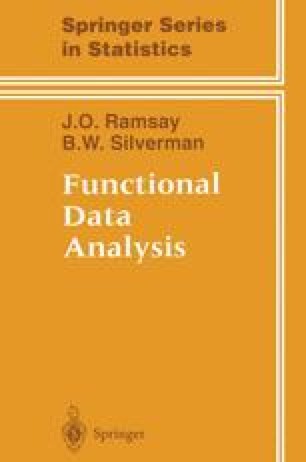 So far in this book, we have concentrated on analysing the variability of a single functional variable, albeit one that may have a rather complicated structure. In classical statistics, techniques such as linear regression, the analysis of variance, and the general linear model all approach the question of how variation in an observed variable may be accounted for by other observed quantities. We now extend these general ideas to the functional context.

Design Matrix Stance Phase Vertical Force Basis Expansion Shoeing Condition
These keywords were added by machine and not by the authors. This process is experimental and the keywords may be updated as the learning algorithm improves.
Download to read the full chapter text