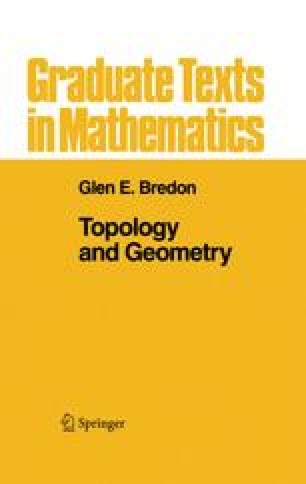 With this chapter we begin the study of algebraic topology. The central idea behind algebraic topology is to associate an algebraic situation to a topological situation, and to study the simpler resulting algebraic setup. For example, to each topological space X there could be associated a group G(X), such that homeomorphic (indeed, usually homotopically equivalent) spaces give rise to isomorphic groups. Usually, also, to a map of spaces one associates a homomorphism of the groups attached to those spaces, such that compositions of maps yield compositions of homomorphisms of groups. Then anything one can say about the algebraic situation, gives information about the topological one. For example, if we have two spaces whose associated groups are not isomorphic, then we can conclude that the spaces cannot be homeomorphic.

Base Point Fundamental Group Homotopy Class Homotopy Group Covering Space
These keywords were added by machine and not by the authors. This process is experimental and the keywords may be updated as the learning algorithm improves.

Finally, let me propose still another kind of geometry, which, in a sense, is obtained by the most careful sifting process of all, and which, therefore, includes the fewest theorems. This is analysis situs....