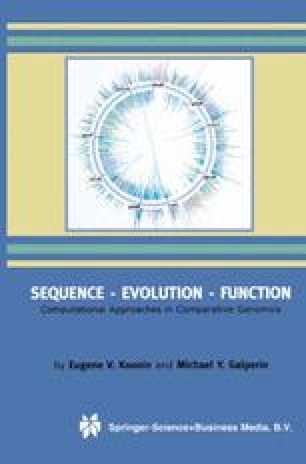 In Chapter 2, we primarily focused on the foundations of comparative genomics that come from evolutionary theory and only briefly summarized the evolutionary implications of genome comparisons. In this chapter, we address the connection between comparative genomics and evolution from a different angle. The question we ask is: how does comparative genomics affect our understanding of major aspects of the evolution of life? We believe that the effect is (or at least has the potential to be) truly profound. Perhaps most importantly, comparative genomics has already led to the reappraisal of the central trends of genome evolution. Instead of the classic concept of relatively stable genomes, which evolve through gradual changes spread through vertical inheritance, we now have the new notion of “genomes in flux” [787] . According to this concept, evolution involves gene loss and horizontal gene transfer as major forces shaping the genome, rather than isolated incidents of little consequence.

The affinities of all beings of the same class have sometimes been represented by a great tree. I believe this simile largely speaks the truth.

I should infer from analogy that probably all organic beings which have ever lived on this earth have descended from some one primordial form, into which life was first breathed.