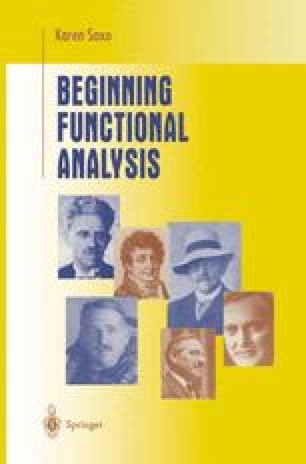 The foundations of integration theory date to the classical Greek period. The most notable contribution from that time is the “method of exhaustion” due to Eudoxos (ca. 408–355 B.C.E.; Asia Minor, now Turkey). Over two thousand years later, Augustin Cauchy stressed the importance of defining an integral as a limit of sums. One’s first encounter with a theory of the integral is usually with a variation on Cauchy’s definition given by Georg Friedrich Bernhard Riemann (1826–1866; Hanover, now Germany). Though the Riemann integral is attractive for many reasons and is an appropriate integral to learn first, it does have deficiencies. For one, the class of Riemann integrable functions is too small for many purposes. Henri Lebesgue gave, around 1900, another approach to integration. In addition to the integrals of Riemann and Lebesgue, there are yet other integrals, and debate is alive about which one is the best. Arguably, there is no one best integral. Different integrals work for different types of problems. It can be said, however, that Lebesgue’s ideas have been extremely successful, and that the Lebesgue integrable functions are the “right” ones for many functional analysts and probabilists. It is no coincidence that the rapid development of functional analysis coincided with the emergence of Lebesgue’s work.

Lebesgue Measure Measure Space Simple Function Cauchy Sequence Normed Linear Space
These keywords were added by machine and not by the authors. This process is experimental and the keywords may be updated as the learning algorithm improves.
This is a preview of subscription content, log in to check access.