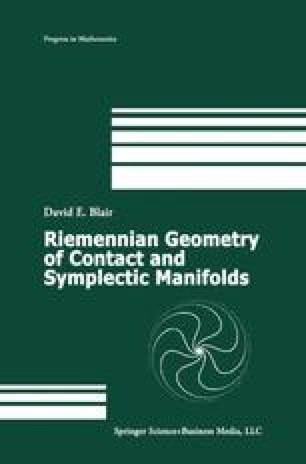 The study of the integral of the scalar curvature, A(g) = ∫ M τ dV g , as a functional on the set M 1 of all Riemannian metrics of the same total volume on a compact orientable manifold M is now classical, dating back to Hilbert [1915] (see also Nagano [1967]). A Riemannian metric g is a critical point of A(g) if and only if g is an Einstein metric. Since there are so many Riemannian metrics on a manifold, one can regard, philosophically, the finding of critical metrics as an approach to searching for the best metric for the given manifold. Other functions of the curvature have been taken as integrands as well, most notably \( B(g) = {\int_M {{\tau ^2}d{V_g},\;C(g) = \int_M {\left| \rho \right|} } ^2}d{V_g} \) where ρ is the Ricci tensor, and \(D(g) = \int_M {{{\left| {{R_{kjih}}} \right|}^2}} d{V_g}\); the critical point conditions for these have been computed by Berger [1970]. From the critical point conditions it is easy to see that Einstein metrics are critical for B(g) and C(g) but not necessarily conversely. For example an η-Einstein manifold M 2n+1 with scalar curvature equal to 2n(2n + 1) or 2n(2n + 3) is a non-Einstein critical metric of C(g), Yamaguchi and Chūman [1983]. In the case of B(g) Yamaguchi and Chūman showed that a Sasakian critical point is Einstein. Similarly metrics of constant curvature and Kähler metrics of constant holomorphic curvature are critical for D(g), see Muto [1975]; also a Sasakian manifold of dimension m and constant ϕ-sectional curvature 3m — 1 is critical for D(g), see Yamaguchi and Chūman [1983].

Scalar Curvature Riemannian Metrics Contact Manifold Ricci Operator Unit Vector Field
These keywords were added by machine and not by the authors. This process is experimental and the keywords may be updated as the learning algorithm improves.
Download to read the full chapter text