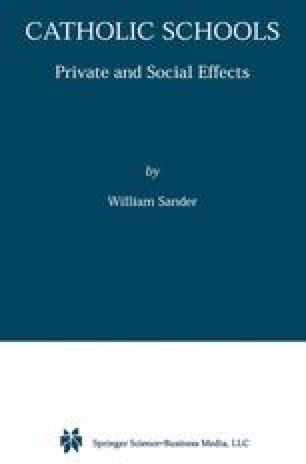 Substantial attention has been given to the effects of Catholic and other private primary and secondary schooling on student achievement (Bryk, Lee, and Holland, 1993; Coleman and Hoffer, 1987; Coleman, Hoffer, and Kilgore, 1982; Evans and Schwab, 1995; Figlio and Stone, forthcoming; Greeley, 1982; Hoffer, Greeley, and Coleman, 1985; Ludwig, 1997; Murnane, 1984; Murnane, Newstead, and Olsen, 1985; Neal, 1997; Noell, 1982; Rouse, 1998; Sander, 1996 and 1997; Sander and Krautmann, 1995; Witte, 1992). All of the recent research focuses on individuals who were either in grade school or high school during the 1970s and thereafter. The key issue that has been addressed in the research on private schools is whether positive private school effects are the result of selection or better schooling. To my knowledge, no study of older cohorts has been undertaken that addresses the selection issue. Some of the historical research in this area suggest that students in Catholic schools had higher levels of educational attainment than students in public schools (Perlmann, 1989). However, a rigorous test of the hypothesis that Catholic schools caused higher levels of attainment has not been undertaken.

Private School General Social Survey Older Adult School Effect Catholic School
These keywords were added by machine and not by the authors. This process is experimental and the keywords may be updated as the learning algorithm improves.

This chapter is based upon William Sander, “Parochial Schools and Student Achievement: Findings for Older Adults,” Education Economics, forthcoming 2000. The author would like to thank Taylor & Francis Ltd. for permission to reprint the article. The journal’s web site can be accessed at: http://www.tandf.co.uk/journals/