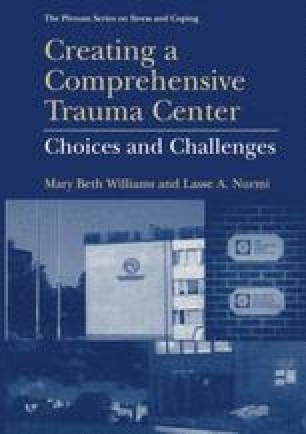 The Need for Comprehensive Trauma Centers

This chapter has been months in its writing. During one revision, the tragic events of the death of Diana, Princess of Wales, were being replayed throughout the world. Her battered body was laid to rest on an island in the middle of a lake on her ancestral homeland and the grief of the entire world mourned her tragic, untimely death. Thousands of bouquets were thrown on her hearse as it carried her on that final ride. Her sons, not as stoic or controlled as others in the royal family, but alive and grief stricken as normal boys, accompanied her to the small spot of earth that was her final destination. One year later, on the anniversary of her death, the world mourned again, replaying the events in great detail as television shows questioned the conspiracy theories surrounding her death, played biographical programs, and repeated their telecasts of the funeral and mourning period.

Traumatic Event Child Sexual Abuse Posttraumatic Stress Disorder Traumatic Stress Borderline Personality Disorder
These keywords were added by machine and not by the authors. This process is experimental and the keywords may be updated as the learning algorithm improves.
This is a preview of subscription content, log in to check access.