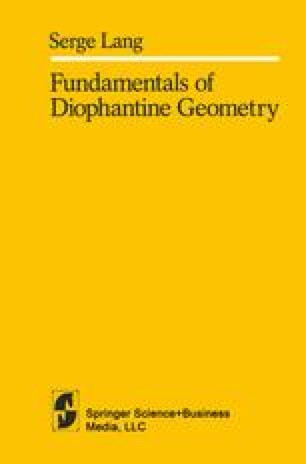 If C is an affine curve defined over a ring R finitely generated over Z, and if its genus is ≧ 1, then C has only a finite number of points in R. This is the central result of the chapter. We shall also give a relative formulation of it for a curve defined over a ring which is a finitely generated algebra over an arbitrary field k of characteristic 0. In that case, the presence of infinitely many points in R implies that the curve actually comes from a curve defined over the constant field and that its points are of a special nature (excluding possibly a finite number).

Integral Point Galois Group Abelian Variety Number Field Finite Type
These keywords were added by machine and not by the authors. This process is experimental and the keywords may be updated as the learning algorithm improves.
This is a preview of subscription content, log in to check access.