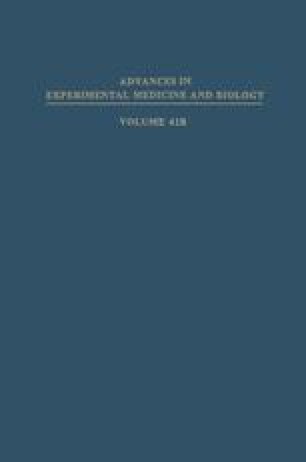 In the present study we found that the plasma glutamate in patients with primary gout was significantly higher than that in the nongouty subjects. (Table I) In 62 gouty subjects with plasma urate > 8.0 mg%, the plasma glutamate was 80 ± 27 μM/L as compared to 53 ± 16 μM/L in 28 normal controls. There was appreciable overlap in the two groups, but the level in 2/3 of the gouty subjects exceeded the normal mean by + I s.d., and in 1/3 exceeded the normal mean by + 2 s.d.In 12 distinctly hyperuricemic, but asymptomatic young sons of overtly gouty subjects, the mean plasma glutamate level was 79 ± 14 μM/L. In 24 similar but normouricemic young sons, the mean plasma glutamate level was significantly lower, 56 ± 15 μM/L, not distinguishable from the normal controls. The data indicate that hyperglutamatemia is not only a frequent accompaniment of hyperuricemia in primary gout, but appears early in the course of the disease, before the onset of symptoms and apparently in conjunction with the onset of hyperuricemia at about the time of puberty.

Glutamate Concentration Primary Gout Plasma Glutamate INOSINIC Acid Plasma Glutamate Level
These keywords were added by machine and not by the authors. This process is experimental and the keywords may be updated as the learning algorithm improves.
This is a preview of subscription content, log in to check access.