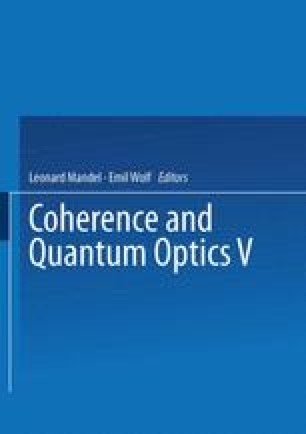 Photodissociation of a homonuclear diatomic molecule gives two identical atomic fragments, which, as a consequence of momentum conservation, are constrained to follow identical but oppositely directed trajectories with respect to their center of mass. For exciting radiation within a certain wavelength range only one of the atoms will be electronically excited. A photodetector viewing the subsequent atomic fluorescence sees a photon whose wavefunction is a superposition of two states corresponding to emission from either of the two oppositely directed atomic recoil trajectories. In a molecular beam experiment arranged to eliminate the Doppler effect, square law detection of the photon gives rise to beats in the detector signal at a frequency determined by the atomic velo­city and the angle the recoil trajectory makes with the detection axis. Since photofragmentation takes place over a distribution of recoil directions the beats (which add incoherently) are found over a range of frequencies that mirrors the angular distribution of the atomic fragments. The power spectral density of the detec­tor noise is found to depend upon the asymmetry parameter for the photofragment angular distribution, the atomic recoil velocity and the frequency of the fluorescence photon.