Products of Random Matrices with Applications to Schrödinger Operators 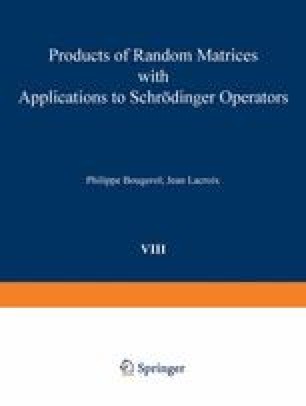 Chapter
Part of the Progress in Probability and Statistics book series (PRPR, volume 8)

We now prove the strongest singularity property for the spectrum of Schrödinger operators, that is the pure point spectrum property. Until the end of the year 1984 the only known proofs were very close from the original one given by the Russian school (see the introduction). In most of these works it was not clear what was really necessary in order to obtain the pure point spectrum property, since they dealed essentially with the independent or Markov cases under strong assumptions on these processes. A very clarifying idea of Kotani introduced in II.7 and applied to the independent case in the first section gives very easily the expected result, at least in the classical Schrödinger case, that is when bn = 1, ∀n ε ZZ. It’s not clear that such a procedure can be easily applied to the Helmotz case. Furthermore Kotani’s theory does not use any approximation of the spectral properties of H by means of “thermodynamic limits” along sequences of boxes going to ZZ. Thus if we want to obtain some information about the speed of convergence of these spectral measures computed in boxes, we have to use an other way. In this purpose the second section is devoted to the study of the Laplace transform on SL(2,ℝ). The corresponding operators were already introduced in A.V. In section 4, using the spectral properties of these operators, we prove again the pure point spectrum property in the independent case, thank’s to the “good” approximations of the spectral measures of H obtained in I. These results are also used in section 5, in order to obtain a representation formula for the density of states.

Compact Operator Spectral Radius Invariant Probability Measure Pure Point Markovian Operator
These keywords were added by machine and not by the authors. This process is experimental and the keywords may be updated as the learning algorithm improves.
This is a preview of subscription content, log in to check access.