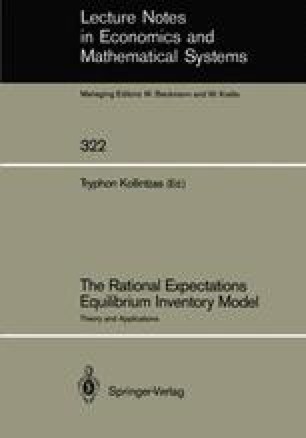 Inventories and Price Fluctuations under Perfect Competition and Monopol

This paper examines the impact of speculative inventories on the rational expectations competitive equilibrium laws of motion of prices, output and sales when firms are confronted with stochastic production and input choices are made prior to the realization of these shocks. The case of a monopolist producer-speculator is also considered. It is shown that a nonnegativity constraint on inventories will, occasionally be binding under both perfect competition and monopoly. Under these circumstances, there exists, for both industry structures, an inventory reservation price which has the property that inventories will be positive when the market price is less than the reservation price. When this is not the case, inventories will be zero. This result is established under general convex production and inventory holding costs.

An example is also provided for calculating the competitive and monopoly equilibria, when corners are taken into account and the shocks to production are independently and identically distributed. The comparative dynamics as well as the impact of industry structure on the means and variances of prices, inventories, production and consumption are analyzed.

Demand Curve Reservation Price Competitive Equilibrium Industry Structure Nonnegativity Constraint
These keywords were added by machine and not by the authors. This process is experimental and the keywords may be updated as the learning algorithm improves.

The authors would like to acknowledge helpful comments by Neil Wallace, Takotoshi Ito, Thomas Sargent, Steven Turnovsky and members of the Labor and Population Workshop at Yale University.