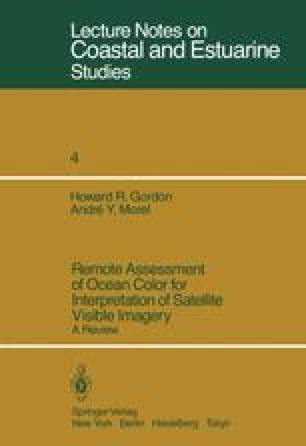 There is little doubt that the atmospheric correction algorithm described by Eq. 13 in Section II-B is applicable over some portion of a CZCS scene when S(λ,λo) can be found, and when Lw(λo) = 0. Initially, it was envisioned that S(λ,λo) could be determined from surface measurements of the aerosol optical depth τA, using Eq. 12 in conjunction with the assumption that ωA and PA are independent of wavelength. Alternatively, measurements of Lw (actually Lu) could be used directly with Eq. 13 to provide S(λ,λo). Since it is unlikely that S(λ,λo) would be determined at many locations in an image, one is actually forced to assume that S(λ,λo) remains essentially constant even though the turbidity of the atmosphere may vary considerably from location to location. Gordon (1981a) has shown that S(λ,λo) can in fact remain nearly constant in a horizontally inhomogeneous atmosphere. As mentioned above, a sufficient condition for this is that the aerosol size distribution (normalized to the total concentration) and refractive index be independent of position over the image even in the presence of variations in the total concentration.

Aerosol Optical Depth Pigment Concentration Atmospheric Correction Aerosol Size Distribution Sensor Calibration
These keywords were added by machine and not by the authors. This process is experimental and the keywords may be updated as the learning algorithm improves.
This is a preview of subscription content, log in to check access.