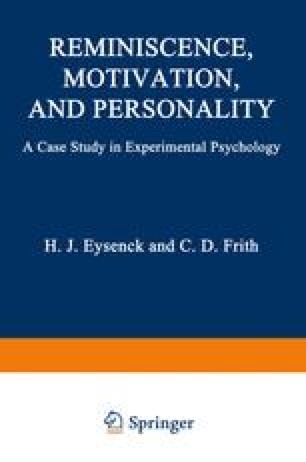 Kraepelin appears to have been the first to extend work on mental and motor performance, and on reminiscence, to abnormal groups; he reports on the performance of schizophrenics on a simple addition task (massed practice for 10 min), followed by a pause of 5 min (Kraepelin, 1913). Performance increased markedly after the rest pause, but then sank to a low level. Hoch (1901), a pupil of Kraepelin’s, used the ergograph in his experiments; he found that manic-depressives showed a reversal of fatigue effects. Performance was found to increase in strength before a reduction appeared with exhaustion. These experiments were not particularly well controlled, they lacked proper comparison groups, and neither the statistical treatment nor the description of the experiment is adequate for a proper evaluation. This work did, however, set the stage for later more adequately controlled studies which have thrown some light on the performance characteristics of psychotic groups. Several pioneering studies investigated learning in insane Ss (e.g., Kent, 1911; Boring, 1913; Hull, 1917), but the first experiments relevant to the topic of this chapter were those of Huston and Shakow (1948).

Rest Interval Short Rest Chronic Schizophrenic Pursuit Rotor Grand Design
These keywords were added by machine and not by the authors. This process is experimental and the keywords may be updated as the learning algorithm improves.
This is a preview of subscription content, log in to check access.