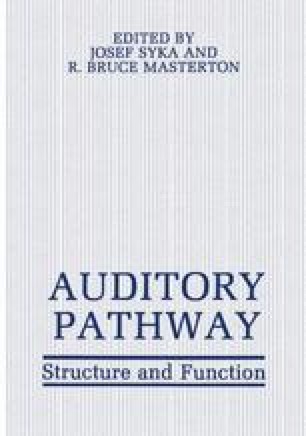 The distribution pattern of the primary afferents to the cochlear nuclei was proposed by Cajal (1909) and Lorente de Nó (1933). Later it was analyzed by different authors in several different species (for a review, see Ahesen et al., 1978). These authors concluded that the primary fibers branch in a “V” shape and that they have a geometric distribution that in all cases is related to a frequency; that is, to a particular origin in the cochlea. Our group has analyzed the problem with transganglionic HRP transport and silver staining methods (Merchan, 1985 a, b) and has concluded that apart from the tonotopic “V” shapes reported by Lorente de N6 (1933) there are nerve fibers that give rise to two primary plexuses (anterior and posterior, Fig. 1) that have a different distribution.