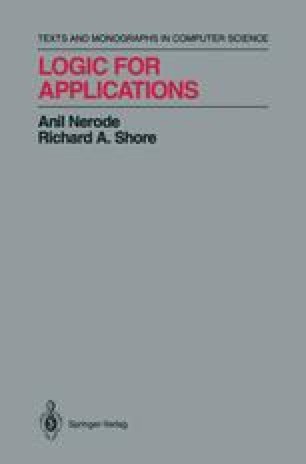 The logic of predicates encompasses much of the reasoning in the mathematical sciences. We are already familiar with the informal idea of a property holding of an object or a relation holding between objects. Any such property or relation is an example of a predicate. The difference between a property and a relation is just in the arity of the predicate. Unary predicates are simply properties of objects, binary ones are relations between pairs of objects and in general n-ary predicates express relations among n-tuples of objects. A reasonable answer to the question of what are 0-ary predicates might well be that they are propositions. The point here is that they are simply statements of facts independent of any variables. Thus, for example, if we are discussing the natural numbers we may let φ(x, y) denote the binary relation (predicate) “x is less than y”. In this case φ(3, y) denotes the property (unary predicate) of y “3 is less than y” and φ(3, 4) denotes the (true) proposition (0-ary predicate) that 3 is less than 4.

Propositional Logic Function Symbol Atomic Formula Predicate Logic Ground Term
These keywords were added by machine and not by the authors. This process is experimental and the keywords may be updated as the learning algorithm improves.
This is a preview of subscription content, log in to check access.