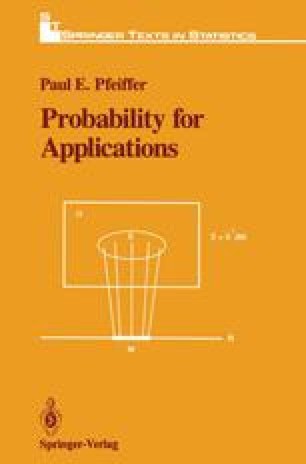 Probability for Applications pp 25-43 | Cite as

In Chapter 1, elementary examples show that probability applies to situations in which there is a well-defined trial whose possible outcomes are found among a given basic set. In that chapter, we begin our modeling of probability by formalizing the notion of an event. Occurrence or nonoccurrence of an event is determined by characteristics or attributes of the outcome observed. The event is taken to be the subset of possible outcomes that have these characteristics. Performing the trial is visualized as selecting an outcome from the basic set. An event occurs whenever the selected outcome is a member of the subset representing the event. As described in Chapter 1, the selection process could be quite deliberate with a prescribed outcome or it could involve the uncertainties associated with “chance.” Probability enters the picture only in the latter situation. The probability of an event is a measure of the likelihood that the outcome of the trial will belong to that event. In this chapter, we seek to represent mathematically the likelihood that an event will occur. For this, we introduce the concept of a probability measure.

Probability Measure Probability System Basic Space Venn Diagram Probability Assignment
These keywords were added by machine and not by the authors. This process is experimental and the keywords may be updated as the learning algorithm improves.
This is a preview of subscription content, log in to check access.