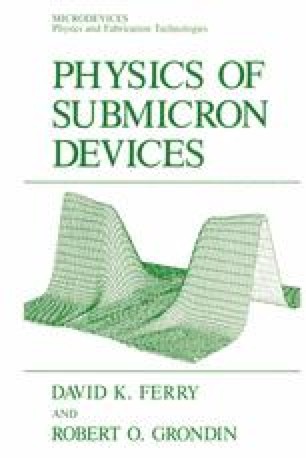 In recent years, as device sizes have become smaller and carrier densities have become larger, the role of electron-electron scattering and screening have become very important in transport within semiconductor devices. The main difficulty in dealing with the electron-electron interaction lies in the nonlinear behavior of the interaction potential and in the long range of the Coulomb potential. In the past, several approaches to the study of electron-electron scattering have been presented. Almost all of these were based on the assumption that the interaction potential is screened at some characteristic length, usually the Debye length L D = 1/λ = (ε k B T/ne 2)1/2, and that the distribution function is a Maxwellian (inherent in the use of the Debye length). Yet, in the high densities inherent in modern devices, the Debye length is often smaller than the interelectronic distance. The effects are complicated by the fact that in polar materials, the rather high free-carrier plasma frequency that accompanies the high densities couples strongly to the polar optical phonon vibrations to produce coupled modes of electron-plasmon-phonon interactions. To properly treat all of these effects, we must divorce ourselves from the simple screening approach and treat the full frequency-and wavelength-dependent dielectric function.

Dielectric Function Radial Distribution Function High Electric Field Debye Length Plasmon Mode
These keywords were added by machine and not by the authors. This process is experimental and the keywords may be updated as the learning algorithm improves.
This is a preview of subscription content, log in to check access.