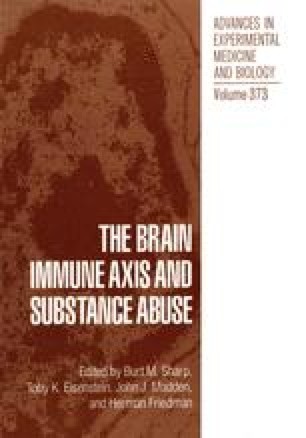 It is now widely accepted that drugs of abuse, such as opiates, cocaine and marijuana, as well as other abuse drugs, both recreational and psychoactive, are potent immunomodulators, suppressing and sometimes enhancing the immune response. A wide variety of models have been used both in vivo and in vitro to demonstrate the immunomodulatory properties of such drugs and the mechanisms involved (Bacynsky et al., 1983a, b, Cushman, and Khurana, 1976, Friedman et al., 1991, 1994, Hollister, 1988, Petersen, 1976, Zimmerman, et al., 1977). In recent years it has been shown in various studies that morphine, cocaine, marijuana and also alcohol have marked effects on various parameters of immunity, including those mediated by T cells, i.e., cell mediated immunity, B cells, i.e., humoral immunity such as antibody formation, as well as natural killer cells, macrophages and PMN cell mediated killing of microbes like bacteria, viruses and fungi. For example, recent studies in this laboratory have shown that marijuana and its components are markedly immunomodulatory (Blanchard et al., 1986, Djeu et al., 1991, Kawakami, 1988 a, b, Klein et al., 1985, 1987, 1993, 1994, Lopez-Cepero, et al., 1986, Pross et al., 1990, 1992, Shivers et al., 1994, Zhu et al., 1993, 1994).

Herpes Simplex Virus Type Psychoactive Component Murine Spleen Cell Drug Treated Mouse Protein Receptor Family
These keywords were added by machine and not by the authors. This process is experimental and the keywords may be updated as the learning algorithm improves.
This is a preview of subscription content, log in to check access.