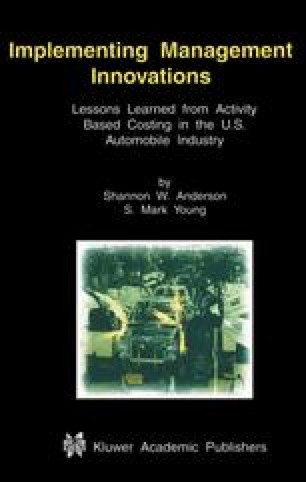 Where are They Now? Reflections on the Past Five Years

The genesis of ABC at General Motors Corporation and at what is now the Chrysler Group of Daimler-Chrysler AG can be traced to the mid and late 1980’s, respectively. As researchers, we were privileged to observe and interact with these firms throughout the 1990’s, when ABC was rolled out to all manufacturing locations and some administrative functions. Our most intensive interactions occurred in 1995, with extensive Visits to 21 ABC implementation sites and interviews with 265 managers and ABC team members. Using these data and historical archives from the ABC systems, the preceding chapters provide a piercing look at the first decade of ABC through the lens of two large companies that chose to adopt and implement it. However, we would be remiss if we did not consider how events of recent years --- including dramatic changes in the boundaries and ownership of both firms, advances in information technology, and a booming U.S. consumer market --- have affected the ABC initiative. In this chapter we provide an update on the ABC initiatives. With the help of experienced corporate managers who have been involved for many years with ABC, we reflect on what ABC was, what it is today, what is envisioned for the future.

Business Process Cost Driver Process View Performance Measurement Approach General Motor Corporation
These keywords were added by machine and not by the authors. This process is experimental and the keywords may be updated as the learning algorithm improves.
This is a preview of subscription content, log in to check access.