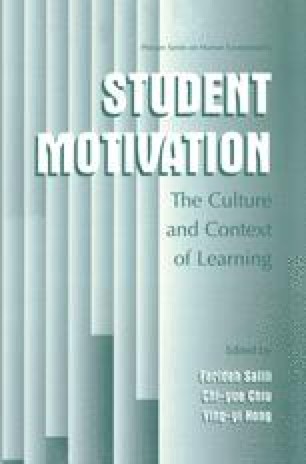 Intrapersonal and Interpersonal Theories of Motivation from an Attribution Perspective

In this context, I will present the current state of my attributional approach to motivation and classroom issues. The picture I will paint includes two inter-related theories. Imagine, for example, a student has just received a poor grade on an exam and we, as psychologists, desire to predict if he or she will continue in school or drop out. Among the likely predictors are subjective expectancy of future success and self-directed emotions related to self-esteem, guilt, shame, and others. These self-directed thoughts and feelings comprise what I label an intrapersonal theory of motivation.

Achievement Motivation Causal Belief Achievement Setting Interpersonal Theory Causal Stability
These keywords were added by machine and not by the authors. This process is experimental and the keywords may be updated as the learning algorithm improves.
This is a preview of subscription content, log in to check access.