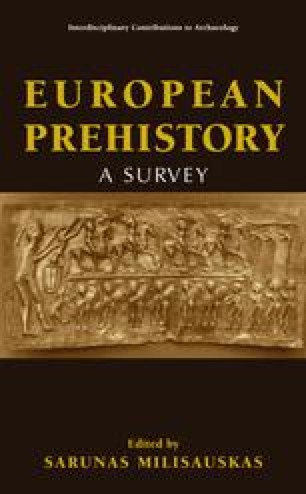 The Lower and Middle Palaeolithic

Europe in the ice age was a very different place than today, or rather, it was many different places. During the vast time period examined in this chapter the continent underwent numerous, dramatic changes in habitat and climate. Studies of these changes have focused on the geological record of river gravels and soil deposition, on the evidence for climatic changes preserved in deep sea cores, on the vegetational record preserved in pollen, and on the varying evidence of human artifacts. Each of these approaches has developed and modified its own chronological scheme; changes in one sort of evidence, however, tend not to correlate well with changes in the others, which means that there is an often bewildering variety of terms and stages used to describe the record of the past.

Glacial Period Archaeological Record Stone Tool Stone Artifact Palaeolithic Site
These keywords were added by machine and not by the authors. This process is experimental and the keywords may be updated as the learning algorithm improves.
This is a preview of subscription content, log in to check access.