Justice and Economic Violence in Transition 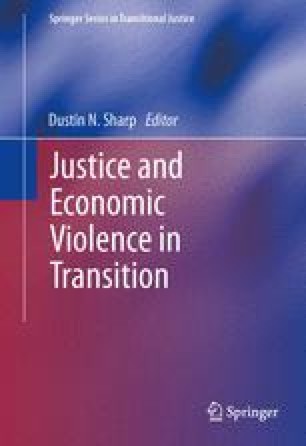 Justice and Economic Violence in Transition pp 27-49 | Cite as

Liberal Peacebuilding and Transitional Justice: What Place for Socioeconomic Concerns?

Recent scholarship in transitional justice has increasingly acknowledged that both the practice and study of justice in transition have focused almost exclusively upon violations of civil and political rights, and particularly of bodily integrity, to the relative exclusion of violations of economic, social, and cultural rights. This chapter examines one dimension of this emergent discussion, arguing that the exclusion of “socioeconomic concerns” derives in part from the degree to which many contemporary transitional justice processes are embedded in or shaped by liberal peacebuilding missions. It argues that as peacebuilding operations focus primarily upon democratization and marketization, they might be expected to focus upon the creation or restoration of core civil and political rights.  Further, such operations may either overlook or be unable to respond to demands to address socioeconomic concerns, which may conflict with imperatives of marketization. The chapter calls for caution in response to calls for transitional justice to address socioeconomic concerns, given that the former is already overburdened with expectations and may not be well suited to respond to the latter.

Transitional Justice Truth Commission Economic Crime Security Sector Reform Socioeconomic Issue
These keywords were added by machine and not by the authors. This process is experimental and the keywords may be updated as the learning algorithm improves.

I would like to thank Amy Ross for extensive discussions and comments on an earlier draft of this chapter and Dustin Sharp’s incisive comments and suggestions. Any errors are of course mine alone.