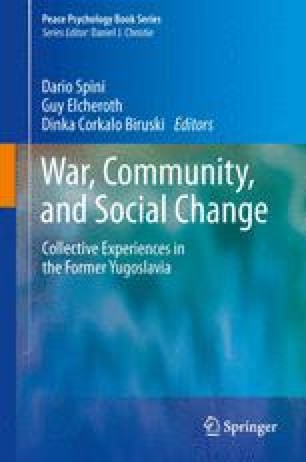 Ivana Macek has experienced and documented the siege of Sarajevo as an anthropologist. In this chapter, she shares some of her most memorable observations and reflects on the ways in which violence and ethno-national identity discourses and identifications influenced each other during siege. She argues that the national animosities in Sarajevo are the result of the nationally defined war, rather than the cause of the war, as it often was promoted both in the West and in territories of former Yugoslavia.

She describes how, while she socialised and talked with Sarajevans during her stays during five different periods of the siege, it became clear to her that no one has a completely homogeneous picture of the war and of their fellow citizens and countrymen. Through describing some concrete examples from Sarajevo, she suggests that there are essentially three different stances to perceive the war and other people: ‘Civilian’, ‘Soldier’, and ‘Deserter’. Here ‘Civilian’ stands for not accepting that war is possible, a stance shattered by the realities of war, yet continuing to live within everyone with an irrational but psychologically and politically vital hope of a reliable, ordered and safe society that we all long for. The ‘Soldier’ perspective divides people into friends and foes, enemies and compatriots and, in the Sarajevan case, along ethno-national identities. This stance enables us to structure and understand the war and legitimises our choices whether to fight or flee. This is the predominant discourse of political and military power holders, locally as well as globally. The ‘Deserter’ perspective comes up gradually as experiences of war; the neat divisions and understandings of the ‘Soldier’ stance do not hold. To put it simply, all enemies are not evil, and all brethren are not trustworthy. This is an underreported reality of wars: foes can save your life, whereas friends can leave you to die. By means of these three perspectives, the author suggests that we can better grasp the internal dynamics of coping with unimaginable violence that is part and parcel of wars and genocides and that any person involved in mass political violence has to deal with.