Introduction to the Theory of Quantum Information Processing 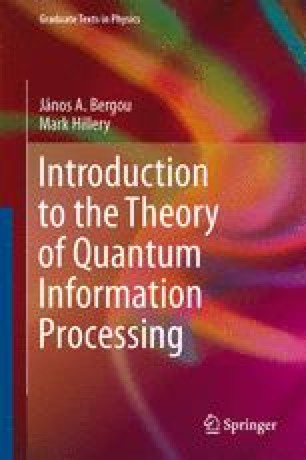 Time evolution in textbook quantum mechanics is represented by unitary maps \(\vert \psi \rangle \rightarrow U\vert \psi \rangle\) and \(\rho \rightarrow U\rho {U}^{\dag }\), where \(U ={ \mathrm{e}}^{-itH}\). This is not the most general evolution possible. We can couple our system to another one, evolve both with a unitary operator that will, in general, create entanglement between the two systems, and then trace out the second system. The resulting evolution for the original system alone will be non-unitary, in general, and can be described by a non-unitary quantum map.

Generalized Quantum Dynamics Quantum Map Quantum Mechanics Textbooks Kraus Representation Kraus Operators
These keywords were added by machine and not by the authors. This process is experimental and the keywords may be updated as the learning algorithm improves.
This is a preview of subscription content, log in to check access.