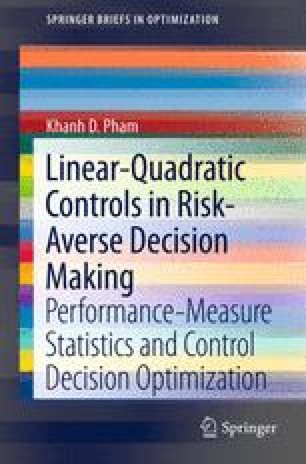 Chapter
Part of the SpringerBriefs in Optimization book series (BRIEFSOPTI)

In introducing the idea of early risk planning, Sain [1] suggested that understanding the dynamics of performance cost in a stochastic control problem requires the establishment of risk-monitoring metrics. These metrics, including but not limited to the cumulants of such cost functions, allow measurement and evaluation of the status of risk-handling options and system performance. In addition, Stanley R. Liberty was the first person to ever calculate and display performance-measure probability densities as published with Michael K. Sain in the research article titled “Performance-Measure Densities for a Class of linear-quadratic Gaussian (LQG) Control Systems,” which appeared in Sain and Liberty [2]. These ideas became the originating node for the author’s research investigation on linear-quadratic controls in risk-averse decision making, a theme which will be evident enough in this monograph.

Performance Robustness Feedback Control Strategy Performance Uncertainty Nonlinear Matrix Equation Statistical Optimal Control
These keywords were added by machine and not by the authors. This process is experimental and the keywords may be updated as the learning algorithm improves.
This is a preview of subscription content, log in to check access.