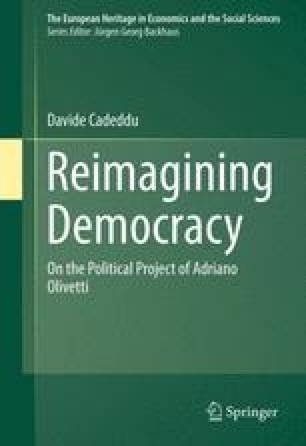 In the attempt to identify the origins of Adriano Olivetti’s political thought, various different studies have noted that his father was Jewish and his mother Waldesian, but that his religious education was free from dogma. These biographical details are often employed to simplistically ascribe a messianic, dreamlike, and even visionary quality to Olivetti’s ‘character’, and a fanciful and eclectic edge to his political thought, rather than offering a true understanding of the influence that religion exerted over him. It is an influence, though, that is notable, given that his political reflection took shape from the consideration of the reality ‘of man and his true nature’, a consideration nourished in itself by views of religious origin.

Religious Education Material Force Political Thought True Understanding Christian Community
These keywords were added by machine and not by the authors. This process is experimental and the keywords may be updated as the learning algorithm improves.
This is a preview of subscription content, log in to check access.