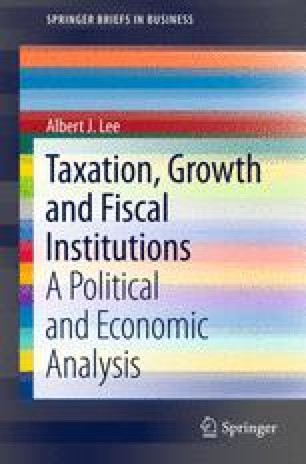 In this chapter two hypotheses are empirically tested. First, controlling for institutions, the growth rate increases as inequality decreases. Second, holding inequality fixed, a strengthening of the integrity of fiscal institutions results in increased economic growth. It is empirically shown that in the subset of democratic countries, the growth rates are negatively related to inequality and positively related to the strength of fiscal institutions. World Bank data on distribution of income are employed to test these hypotheses. Three empirical measures of government consumption—namely average government consumption as a percentage of GDP, average government consumption excluding public education and defense as a percentage of GDP, and average government transfers and subsidies as a percentage of GDP—are defined to calibrate the institutional parameters and to explain the average growth rate from 1974 to 1989 in a cross-country sample. Heteroscedasticity issues are identified and corrected using standard procedures. The regressions provide strong support for the β-convergence hypothesis. Other control variables in the regression are found to have right signs and are statistically significant. Our results suggest that after controlling for regional variations, government transfers and subsidies are harmful to growth. However, once other economic variables are controlled for, institutional arrangements in democracies that promote intergenerational cooperation positively affect long–term economic growth.