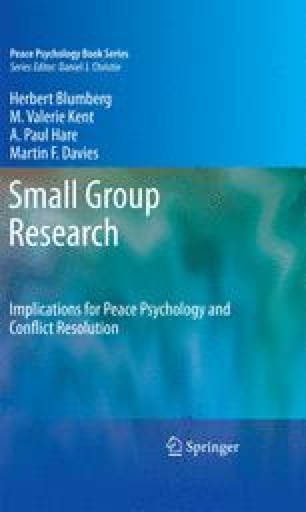 Functional theory helps one to understand not only organizations in general, including those concerned directly with resolving conflicts, but also teams and their performance. Culture, as a system of shared values, at the top of the cybernetic hierarchy, can play an important part when organizational systems developed in the West are transported to the East. Most of the research on team performance is based on research in the USA where the most productive groups are found to carry out effectively the major steps in solving task and social–emotional problems. For a given goal (Meaning, M), the group should have a combination of members’ personalities and skills (Resources, R), type of group structure (Integration, I), and experience in the coordination of problem-solving (Goal-attainment, G) that is appropriate for the task. Training or feedback about performance improves group productivity.

As an aspect of Integration, tests for “emotional intelligence”have now been added to the traditional measures of task ability. Emotional intelligence is part of a person’s ability to be effective with regard to social–emotional relations with other group members. Being a good citizen also helps a person play a part in effective group activity.

For creativity in teams, members must be able to go beyond routine problem-solving. “Brainstorming”is one method that can be introduced to influence the creativity.

Training and feedback both increase group performance. Training is typically given before a group begins a task or when the task format is about to be changed. Feedback is given during the process of work or at the end of some phase of production. Thus, feedback can influence the final Meaning phase of group activity.

Stress can have negative effects that can be offset if group members feel effective, have high-emotional intelligence, job security, and few work/family conflicts.

The same four functions that distinguish effective from ineffective groups also apply to organizations. For organizations, one of the aspects that affects the members’ feelings about each other is the extent to which the organization’s procedures are ethical and seen as based on procedural and distributive justice.

Trust between team members is important as is the trust between salespeople and customers.

There is a greater “political” concern about the extent to which persons of different genders should play different roles than for most other variables that affect social interaction. Organizational cultural practices related to gender equality represent an important predictor of the percentage of women in management. However, women, in particular, are more likely to see the work-home conflict as an important barrier to career advancement.

Time is a goal-attainment variable for groups and individuals. Deadlines make a difference.