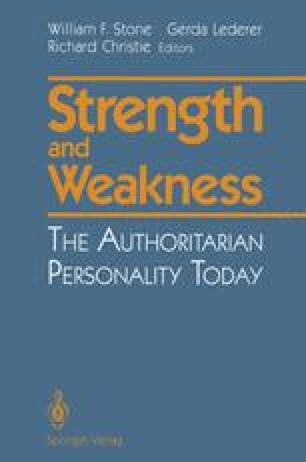 The F Scale as a Predictor of Fascism: An Overview of 40 Years of Authoritarianism Research

From 1950 through 1989, Psychological Abstracts listed 2,341 publications on authoritarianism and dogmatism. To make sense of the often con­tradictory results reported in this vast literature on authoritarianism, a search was initiated to discover whether there are systematic tendencies, focusing on F-scale levels across the many groups tested. The object was to assess the validity of the F scale. Are high scores associated with antidemocratic, profascist tendencies? This was one of the issues that the Berkeley group was unable to address. Surprisingly, such a systematic analysis of F-scale scores has never been conducted, either by follow-up investigators or by reviewers such as Wrightsman (1977), Brown (1965), Byrne (1974), Cherry and Byrne (1977), Dillehay (1978), Goldstein and Blackman (1978), or Altemeyer (1981). The present global meta-analysis, in the classic sense of a combinational approach, is an attempt to correct for this important omission. The present study was part of a wider survey into the validity of authoritarianism research. Only the initial global meta-analysis over the first three decade period will be presented here. For a more complete account see Meloen (1983). Later findings in the 1980s generally supported its conclusions, and some relevant ones have been included in this report.

Student Sample Conscientious Objector Likert Point Authoritarian Attitude Authoritarian Behavior
These keywords were added by machine and not by the authors. This process is experimental and the keywords may be updated as the learning algorithm improves.
This is a preview of subscription content, log in to check access.