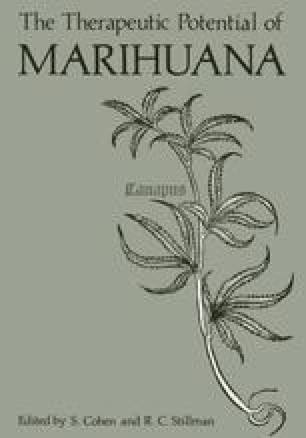 The Therapeutic Potential Of Marihuana pp 63-75 | Cite as

Experiences with Administration of Marihuana to Glaucoma Patients

In 1971 Hepler and Frank reported reduction in intraocular pressure occurring after healthy young adults smoked marihuana. These initial observations led to additional studies designed to compare the pressure-reducing effects of placebo, smoked marihuana, and injected THC. Consistent, statistically-significant pressure reduction was observed in double-blind studies. Drop in intraocular pressure (IOP) was also observed in hospitalized subjects observed repeatedly for 12-hour periods. Additional hospitalized subjects were permitted to smoke marihuana ad libitum during a 5 1/2-hour period and comparisons were made between the pressure-reducing effects of smoking varying numbers of marihuana cigarettes. It was observed, for instance, that a subject smoking 22 cigarettes had only a slight further decrease in IOP as compared with a subject who smoked only 2 cigarettes. Hospitalized subjects observed for a total of 35 days, and other subjects observed for a total of 94 days, continued during these periods of prolonged chronic use of marihuana to show decrease in IOP with each period of intoxication. The results of these various investigations were reported at the International Conference on the Pharmacology of Cannabis, Savannah, Georgia, on December 4, 1974 (Hepler, Frank and Petrus, 1974). Graphical representation of the data is given in Figures 1–4. Publications by Shapiro (1974), Green and Podos (1974),and Purnell and Gregg (1975), among others, have confirmed the apparent IOP-reducing effect of marihuana and cannabinoids.

Intraocular Pressure Glaucoma Patient Good General Health Marijuana Smoking Ocular Effect
These keywords were added by machine and not by the authors. This process is experimental and the keywords may be updated as the learning algorithm improves.
This is a preview of subscription content, log in to check access.