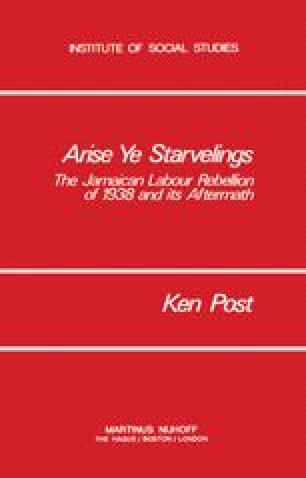 Whatever Bustamante’s views on strikes, sections of the Jamaican workers were in no mood to heed them by the end of 1937. In the last days of the year the labourers at Serge Island, Rudolph Ehrenstein’s biggest estate in St Thomas, struck and held out for several weeks. The resultant police action and disturbances set a pattern which was to be followed on a larger scale later.1 The JWTU, beset as it was by crisis, was not itself involved, but Bustamante attempted to intervene. His rival, A.G.S. Coombs, was still active in Portland; on 28 January a gang again broke up one of his meetings in Port Antonio.2 There were apparently also four pro-Coombs branches of the JWTU still functioning among banana workers in St Mary, the workers in Montego Bay were faithful, and at least some of the Spanish Town leaders had rallied to him again.3

Trade Union Land Settlement Special Constable Colonial Government Colonial State
These keywords were added by machine and not by the authors. This process is experimental and the keywords may be updated as the learning algorithm improves.
This is a preview of subscription content, log in to check access.