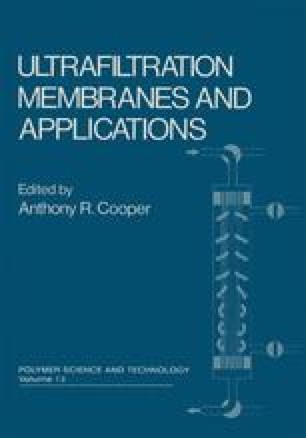 Fifteen Years of Ultrafiltration: Problems and Future Promises of an Adolescent Technology

Despite the fact that the term “ultrafiltration” first appeared in the colloid chemical literature toward the end of the last century, the emergence of ultrafiltration as a viable and practicable separation process had its origins with the development of the first synthetic, high-hydraulic-permeability, macrosolute-retentive ultrafiltration membrane in 1963. This development was an evolutionary consequence of the discovery of the asymmetric cellulose acetate reverse osmosis membrane of the late 1950’s, and the discovery of polyelectrolyte complex hydrogels and their anomalous water-transport properties in research at MIT in the early I960’s. It is a curious fact that the UF membrane development was a direct consequence of a collaboration between Amicon Corporation and Dorr-Oliver, Inc. initiated in 1963 for the purpose of developing an economical process for the large-scale removal of colloidal and macromolecular impurities from secondary sewage effluent — an application which yet remains to be widely exploited. These first-generation membranes, which were shown to be asymmetric structures resembling the Loeb/Sourirajan RO membranes, were relatively water-impermeable by present-day UF membrane standards, but were nonetheless several orders of magnitude more permeable than homogeneous gel-membrane structures with comparable solute retentivity.

Hollow Fiber Cheese Whey Membrane Module Ultrafiltration Membrane Permeation Flux
These keywords were added by machine and not by the authors. This process is experimental and the keywords may be updated as the learning algorithm improves.
This is a preview of subscription content, log in to check access.