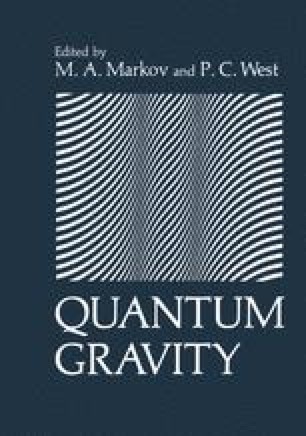 The Loss of Quantum Coherence due to Virtual Black Holes

A gravitational collapse that produces a macroscopic black hole, converts an initially pure quantum state to a final mixed state with non-zero entropy. In this paper it is shown how such loss of quantum coherence occurs on a microscopic, elementary particle level. A series of axioms are presented for the asymptotic Green’s Functions for quantum gravity in asymptotically flat space. These axioms are the same as for Quantum Field Theory in flat space-time, except that one axiom, the uniqueness of the vacuum state, is omitted. This allows diagrams for the probabilities of various final states that cannot be factored into an ordinary Feynman diagram for an amplitude and its complex conjugate diagram. Such diagrams seem to occur when the gravitational field has non-trivial topology. They cause pure initial states to evolve into mixed final states.

Black Hole Pure State Creation Operator Quantum Coherence Flat Space
These keywords were added by machine and not by the authors. This process is experimental and the keywords may be updated as the learning algorithm improves.
This is a preview of subscription content, log in to check access.