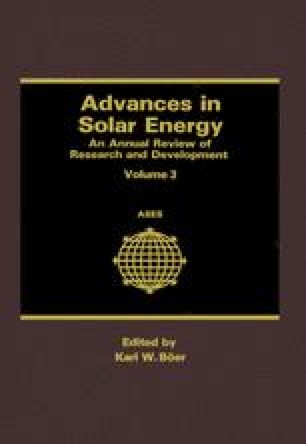 Biomass for Fuel and Food

In many parts of the developing world biomass is being used for energy at a faster rate than it is being replaced. This is leading to increasingly serious problems. Indeed, there is potentially a far greater long-term danger from deforestation and desertification as a consequence of the over-exploitation of biomass than there is from lack of food. Today about 13% of the world’s primary energy is derived from biomass — equivalent to 22 M barrels oil/day. Predominant use is in the rural areas of developing countries where half the world’s population lives, e.g. Nepal and Ethiopia derive nearly all, Kenya 3/4, India 1/2, China 1/3, Brazil 1/4, and Egypt and Morocco a 1/5 of their total energy from biomass. However, in many developing countries, the importation of fossil fuels consumes a large and disproportionate percentage of the country’s total foreign income.

Oil prices continue to be a serious problem. To quote the World Bank, “Contrary to the popular (but erroneous) perception, the cost of energy in most developing countries is at or near all-time peaks as the softening in dollar-denominated oil prices has been offset by the strong USA dollar. The cost of crude oil (GIF) in local currency, taking into account both dollar price and exchange rate fluctuations, has increased dramatically in many countries between 1982 and 1984: 130% in Morocco, 123% in Senegal, 185% in the Philippines, 147% in Kenya; and 237% in Jamaica. Further deterioration of exchange rates against the dollar in early 1985 intensifies the problem.” Recent decreases in oil prices and softening of the dollar are helpful but dramatize the volatility of the situation.

A number of developed countries also derive a considerable amount of energy from biomass, e.g. Sweden 10%, Canada 8%, and USA 4% (more than it derives from nuclear energy, and increasing rapidly), and Australia 3%. An especially valuable contribution can be in the form of liquid fuels which have become so prone to fluctuating price and supply and large import costs. The success of alcohol schemes in Brazil and Zimbabwe, for example, with their energy and economic benefits need to be closely analyzed. The biomass resources available, the effect of large agricultural surpluses (especially in North America and Europe), and factors such as food and land use competition, will all influence biomass energy schemes around the world and are currently debated.

Worldwide government expenditure on biomass energy systems is over $2 bn (bn = 109) a year while the costs and subsidies of surplus food production is over $60bn a year in the USA and Europe alone. Surpluses are due to increase because of economic and political factors and other trends such as changes in Western diets, substitution of commodities such as sugar, and rapidly increasing productivity of plants. However, biomass energy is not necessarily the panacea to any country’s energy problems. Local energy and food requirements related to land use patterns are predominant factors in planning biomass energy systems. Importantly, the productivity of biomass-for-energy species can be dramatically increased as has been already shown in a number of demonstrations around the world. Such improvements emulate some agricultural species such as maize, wheat, soyabeans, and rice. These agricultural R&D successes need to be more widely recognized in terms of economic returns and of social and political advantages which have accrued both locally and nationally. Modern biotechnological research and agronomic practices must be also applied to biomass energy species.

The world produces 10 – 20% more food than is required to feed its 4.5 billion people an adequate diet. Over the last 30 years, per capita food production has increased by 0.8% per annum worldwide. In North America and Europe the main problem with food is its overproduction and general overconsumption. However, there are an estimated 450 M undernourished people, mostly in Asia and Africa. Simplistically, if available food production were increased by 1.5% (equivalent to about 25 Mt of grains) and if this food was distributed equitably to those who needed it, there would be no undernourished people in the world. The same argument applies if only 10% of the developed countries’s grain production were diverted away from animals to humans. Health authorities in the USA and UK have recommended lower dairy products, meat, and sugar consumption. Such changes are already occurring in some developed countries. These diet changes and other biotechnological advances with food substitutes and yield enhancement will have important long-term socioeconomic consequences.

The question is how to achieve both food and biomass fuel production locally on a sustainable basis. Both are required — thus planning and provision of the appropriate infrastructure and incentives must be provided. Increased support of R&D. training, and firm establishment ofgreat priority to agriculture and forestry are essential in many countries of the world — if necessary, with significant help from abroad. In the longer term, the limiting factors will probably not be the lack of good R&D on plants and crops since this is progressing quite rapidly — as long as it is transferred and is adequate in individual countries or regions. However, the lack of implementation of such work with adequate demonstration and extension services, backed up with appropriate agroeconomic policies, is likely to be the bigger problem. Thus R&D must be extensively supported in parallel with training and the buildup of infrastructure — all with prestige and long-term commitment. Otherwise money will be wasted, and the possibility of both food and fuel independence will be lost.

Liquid Fuel Water Hyacinth Sweet Sorghum Fuel Ethanol Alcohol Production
These keywords were added by machine and not by the authors. This process is experimental and the keywords may be updated as the learning algorithm improves.
This is a preview of subscription content, log in to check access.