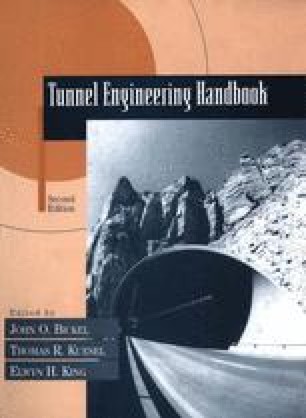 Shallow-depth tunnels, such as large sewer tunnels, vehicular tunnels, and rapid transit tunnels, are frequently designed as structures to be constructed using the cut-and-cover method. Tunnel construction is characterized as “cut-and-cover” construction when the tunnel structure is constructed in a braced, trench-type excavation (“cut”) and is subsequently backfilled (“covered”). For depths up to 35–45 ft this method is often cheaper and more practical than underground tunneling, and depths of 60 ft or more are quite common for rapid transit cuts. This chapter discusses the design and construction of the larger cast-in-place concrete structures used as sewer tunnels or transportation tunnels for pedestrian, vehicular, or rapid transit traffic. The tunnel is typically designed as a box-shaped frame, and due to the limited space available in urban areas, it is usually constructed within a braced excavation. Where adequate space is available, such as in open areas beyond urban development, it is often more economical to use open-cut construction.

Diaphragm Wall Tunnel Structure Sheet Pile Anchor Zone Roof Slab
These keywords were added by machine and not by the authors. This process is experimental and the keywords may be updated as the learning algorithm improves.
This is a preview of subscription content, log in to check access.