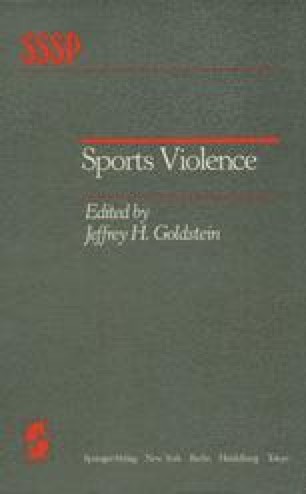 In recent years sports violence has come to be perceived as a social problem. Commissions have been appointed in Canada and England to investigate violence among hockey players and soccer fans. In the United States, Canada, and West Germany, court cases have been heard concerning the victims or perpetrators of violence in professional sports. Newspapers, magazines, and television programs portray bloodied athletes and riotous fans at hockey, boxing, football, soccer, baseball, and basketball games with what appears to be increasing regularity. But is sports violence actually on the increase? Chapters by Guttmann, Vamplew, and Dunning review instances of violence among athletes and spectators from antiquity to the early 20th century. What they report rivals in magnitude any sports-related violence one might encounter today. Changes in sports rules, developments in the design of equipment, and even the physical characteristics of modern sports arenas evolved in an effort to reduce violence or the consequences of violence. Even though there is greater focus on sports violence in the mass media (see Chapter 12), this attention does not necessarily reflect an increase in the incidence of actual violence. It is possible, and I think reasonable, to assume that the heightened public attention and media focus on sports violence reflect not an increase in the incidence or severity of aggression, but greater public concern with the issue. Contrary to popular belief, there appears to be growing dissatisfaction with sports violence.

Hockey Player Symbolic Play Media Violence Media Focus Important Theoretical Issue
These keywords were added by machine and not by the authors. This process is experimental and the keywords may be updated as the learning algorithm improves.
This is a preview of subscription content, log in to check access.